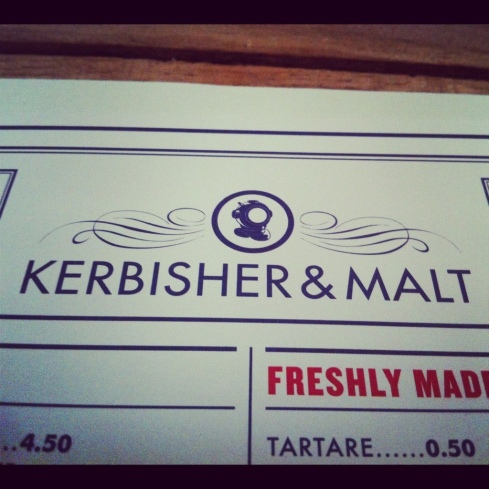 I don’t know about you, but fish and chips is one of those meals that I crave on a fairly regular basis. Maybe it’s deep rooted in my personal history – I grew up close to the seaside where armies of chip eating Londoners would retreat to whenever the sun came out, so there were plenty of fish and chip shops around as I grew up. Or maybe it’s just that the aroma of salt and vinegar has a spell-binding effect on most people, young and old, and convinces us that we must fill our bellies full of deep-fried foods immediately.

What’s more common however is the overwhelming lack of satisfaction I experience when I actually give in to the siren-esque lure of the malt vinegar aroma. Fish and chips has a habit of looking, and smelling outrageously good. Rarely does it ever taste half as good as it looks however, plus I’m often left feeling so bloated and full of stodge afterwards I now actively try to avoid it.

That was until Kerbisher & Malt caught my eye…

Continuing the restaurant trend of ‘doing one thing and doing it ruddy well’, Kerbisher & Malt opened its first restaurant in September last year. Located in Brook Green, West London, I had noticed it in passing and had made a mental note to give it a try. When they recently opened their second branch just a stone’s throw from my office in Ealing, I knew my time had come. A colleague’s leaving lunch was just the excuse we needed to try out what Kerbisher & Malt had to offer.

As the six of us walked in I was immediately impressed by the separate ‘take away’ window they had set up just past the entrance to the restaurant, meaning that those wishing to dine in don’t need to wait in line behind those wanting take away, and vice versa. The take away queue was of a healthy size the entire way through our lunch which was impressive as it had only been open a few days – word has clearly been spreading! The decor is relaxed and slightly distressed (with a hint of New England beach house about it). The branding is rather cool, and one can’t help but think that if they made the journey to Shoreditch, it would become an overnight success in East
London also.

The menu is extremely simple which once I had scoffed at the lack of battered sausage as an option, I quickly came to appreciate. They had haddock, plaice and cod on offer, but it was great to see pollock and coley on there as options also. Only 5 fish to choose from, but you can have your fish either battered, grilled or in Matzo meal. All their fish is fresh and sustainably sourced (they proudly admit on the menu).

Some other old favourites feature including fish finger sandwich (£3.50), calamari (£4), chip butty (£2) and whitebait (£3.50). Or you can choose from a fish cake burger, a fillet of fish burger or spicy veg burger.

Most of us opted for battered pollock, whilst one of our party chose grilled fish and another went for the fish fillet burger. We all agreed on dill and fennel salad sides, mushy peas and home made tartare sauce. There’s a decent selection of wines on offer or you can choose from Meantime IPAs, lagers, and some rather delicious soft drinks. 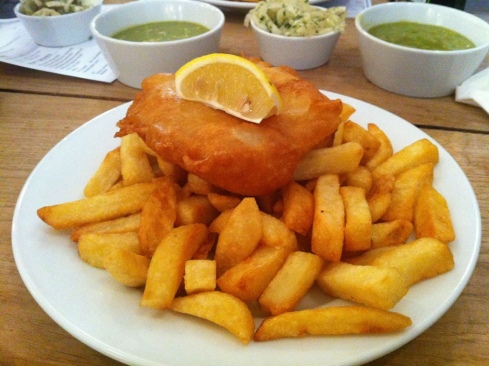 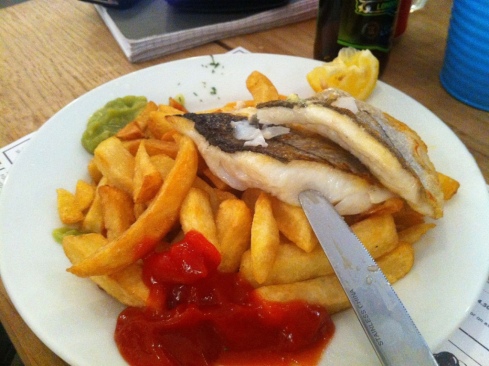 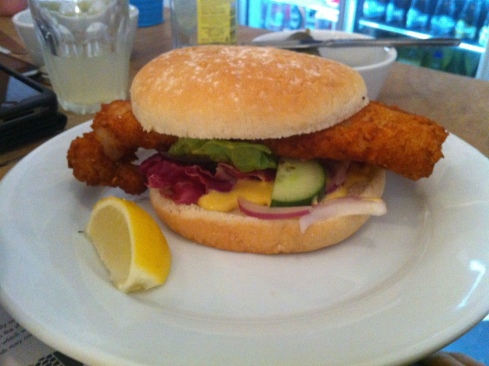 For me, the test always lies quite heavily with the mushy peas and the tartare sauce. I believe it’s actually difficult to make those things really, really well. Kerbisher & Malt have cracked both however. The mushy peas are probably some of the best I have ever tasted! Really buttery and moreish. The fish and chips themselves were absolutely brilliant. The batter on the fish was light and crisp with no sign of that claggy, undercooked layer of batter underneath the surface you often find. The fish was plump and perfectly cooked. The chips were impossibly hard to resist even when we’d all eaten way more than we should. They are exceptionally generous with their portions, as my colleague who ordered the fish fillet burger discovered when he was delivered a cauldron of chips on the side. 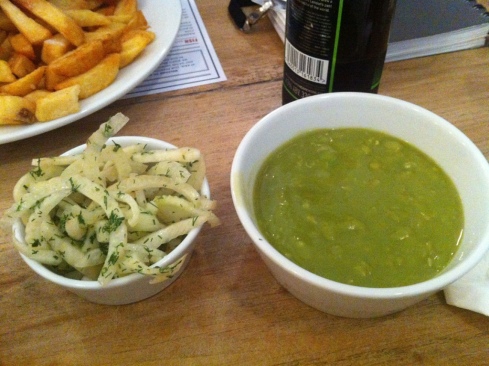 All round this was one of the most satisfying fish and chip suppers I’ve ever had. Better tasting, and half the price of Rick Stein’s famous fish and chips, there’s now no reason to have to travel all the way to Padstow just for some decent f&c.

Living in London; working in marketing; eating like a pig; writing about it. END_OF_DOCUMENT_TOKEN_TO_BE_REPLACED
This entry was posted on Saturday, August 18th, 2012 at 8:16 pm and tagged with brook green, Ealing, fish and chips, Kerbisher & Malt and posted in Eat out. You can follow any responses to this entry through the RSS 2.0 feed.
« Upstairs at The Ten Bells
Feeding in Boston – the sequel. »

One response to “Kerbisher & Malt”